Day 2 :  (Breakfast/Lunch/Dinner) Khao Sam Roi Yot (300 Peaks National Park)
Khao Sam Roi Yot means "The mountain with three hundred peaks" and refers to a series of limestone hills along the Gulf of Thailand with the highest one at 605 meters asl. The northwest corner of the mountain range is called Thung Sam Roi Yot and is mainly freshwater marsh covering nearly 37% of the national park which makes it the largest wetlands area in Thailand.
The main attractions of the national park are Phraya Nakhon Cave with its iconic royal pavilion and huge chamber, Kaeo Cave and Thung Sam Roi Yot Freshwater Marsh. The park is also a nice destination for its rich wildlife in freshwater marsh and mangrove forests, beautiful beaches, limestone islands, trails and viewpoints. It is easily accessible, only 60 km south from Hua Hin
Visit to Tham Phraya Nakhon Cave Being the main attraction of the national park, this cave consists of two sinkholes. In the cave, there is a four-gable roofed royal pavilion called Phra Thinang Khuha Kharuhat, built in 1890 for King Rama V's visits. This pavilion became an iconic symbol of Prachuap Khiri Khan Province. At the right time of year, when the sunlight shines from a certain angle through a sinkhole above the pavilion, the sinkhole opening illuminates a nice beam of light over the pavilion, creating a spectacular and photogenic view.
Afternoon back to Huahin Visit Huahin View Point , Huahin Train Station for Photo

City Tour + Icon Siam - Mahanakorn Sky Walk – Klong Ong Ang . After breakfast 60 Min Drive to Rattanakosin Bangkok Old Town Area ( Victory Monumement, Grand Palace, Jittalada Palace , Giant Swing , Bangkok Metropolitan area) & Visit to Icon Siam . Continue tour to Mahahakorn Sky Walk with Street Food Lunch
15.30 proceed to Klong Aong Ang. Ong Ang Canal or Khlong Ong Ang was dug in the reign of King Rama I after Bangkok was established as the new Thai capital.  Back in the very past, Khlong Ong Ang was just like other canals, where children came to play in the water. There were also food stalls lining up on both sides during nighttime. Not long after, much of the canal was transformed into markets selling second-hand photographic equipment, video games, and toys. It was then known as the biggest toy center in Bangkok. During this period, people could hardly see the canal as it was covered with plenty of metal sheets, bringing about the name “Talat Saphan Lek” or “Iron Bridge Market.”
18.30 Dinner at Local Restaurant 5Days Bangkok Live it up! Package 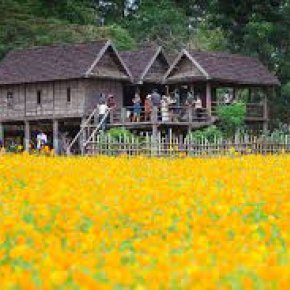 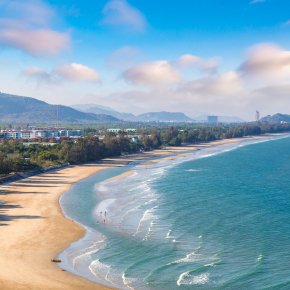